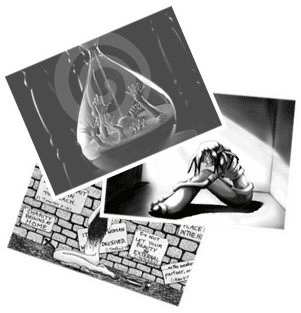 Trudging along the darkened paths,
Through mist and fog...
And choppy waters, buried in oblivion.

Forgetting of this universe's past,
Neglecting the authentic truth
And acting like an odious chameleon.

This dreadful feeling will not pass —
Increasing only...
Compassion is concealed at the aphelion.

University life wasn't easy by any means. It was my sophomore year at the University of Manitoba, and I should've been used to this, but I wasn't. My youngest brother had been murdered right before I started university, and I spent most of my first university year in isolation, studying my textbooks. As a result, I hadn't been exposed to the drunkenness, depravity and superficiality of the people around me. At least, that's how they seemed to me at the time.

Having come from a small isolated town, which anyone from Canada would call a trip back in time, I had still had very strong moral values, and the constant lewdness and ribaldry was too much for me to deal with. This poem reflects those thoughts and gives a glimpse of what I was going through. Like an "odious chameleon", I felt I had to give in to the values of the majority and accept this world, of which I wanted no part, and there was no one to support me in my struggle. My sophomore year was my third year in Canada, but it was then that I finally had my first culture shock... and it was devastating.